There are currently 7,340 housing units in the Midtown Regional Center. Vacancy in the area is much higher than the City average, with 17% of Midtown housing units vacant. The high vacancy rate may be driven by the large number of recently built housing projects. However, it may also be an indication of a significant number of housing units being used as short-term rental units.

The area has a higher concentration of renters than the City as a whole, with 75% of occupied housing units rented, compared to 47% across the City. Most of these rentals are in low-density housing; 57% of rental units are in buildings with 4 or fewer units.

Housing affordability is measured in terms of “cost burden” or the share of income paid towards housing costs. In general, if a household spends more than 30% its gross income on housing costs it is considered to be a “cost burdened” household. Generally, homeowner affordability is not a significant issue in the Midtown area; however, recent changes in the market are impacting homeowner affordability. The average home price in Midtown in 2017 was $358,000 and has increased by 9 percent annually over the past five years. Overall, 24% of homeowners in the area are cost burdened, paying over 30% of income towards housing, a figure on par with the County average. However, this percentage has increased from 17% to 24% since 2000.

The affordability of renting in Midtown is growing concern. The average rent for apartments in the Midtown Regional Center is $1,276 per month and average monthly rents have increased by $650 since 2010, which is almost twice the County’s average increase. Cost burden is a growing issue for low-income renters in Midtown, with 74% of renter households earning less than $20,000 and 52% of renter households earning between $20,000 and $35,000 spending over 30% of income on rent. There are a higher number of renters in single family homes which raises concerns of potential displacement of residents as lower income renters in single family homes are the most vulnerable to impacts of rising rents and property values. 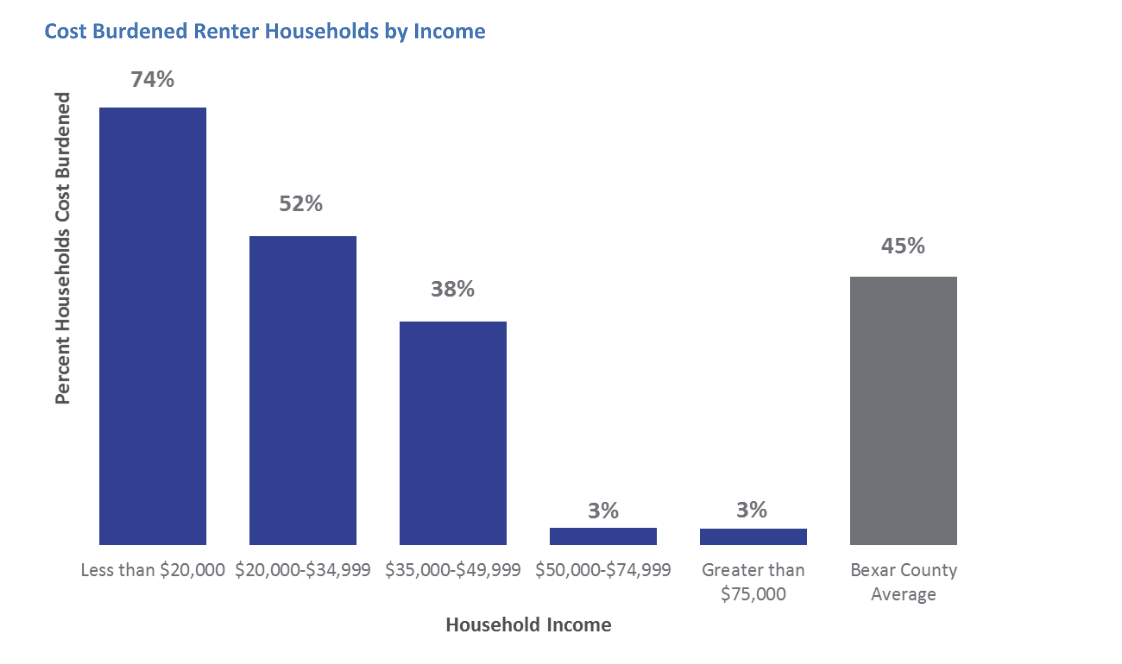 Housing issues and strategies were primary topics of discussion at Community Meeting #2 and Planning Team Meeting #5, and were prominent topics of community and stakeholder input throughout the planning process. Community Meeting and Planning Team Meeting Summaries are available in the documents library of the Midtown Area Regional Center Plan webpage. 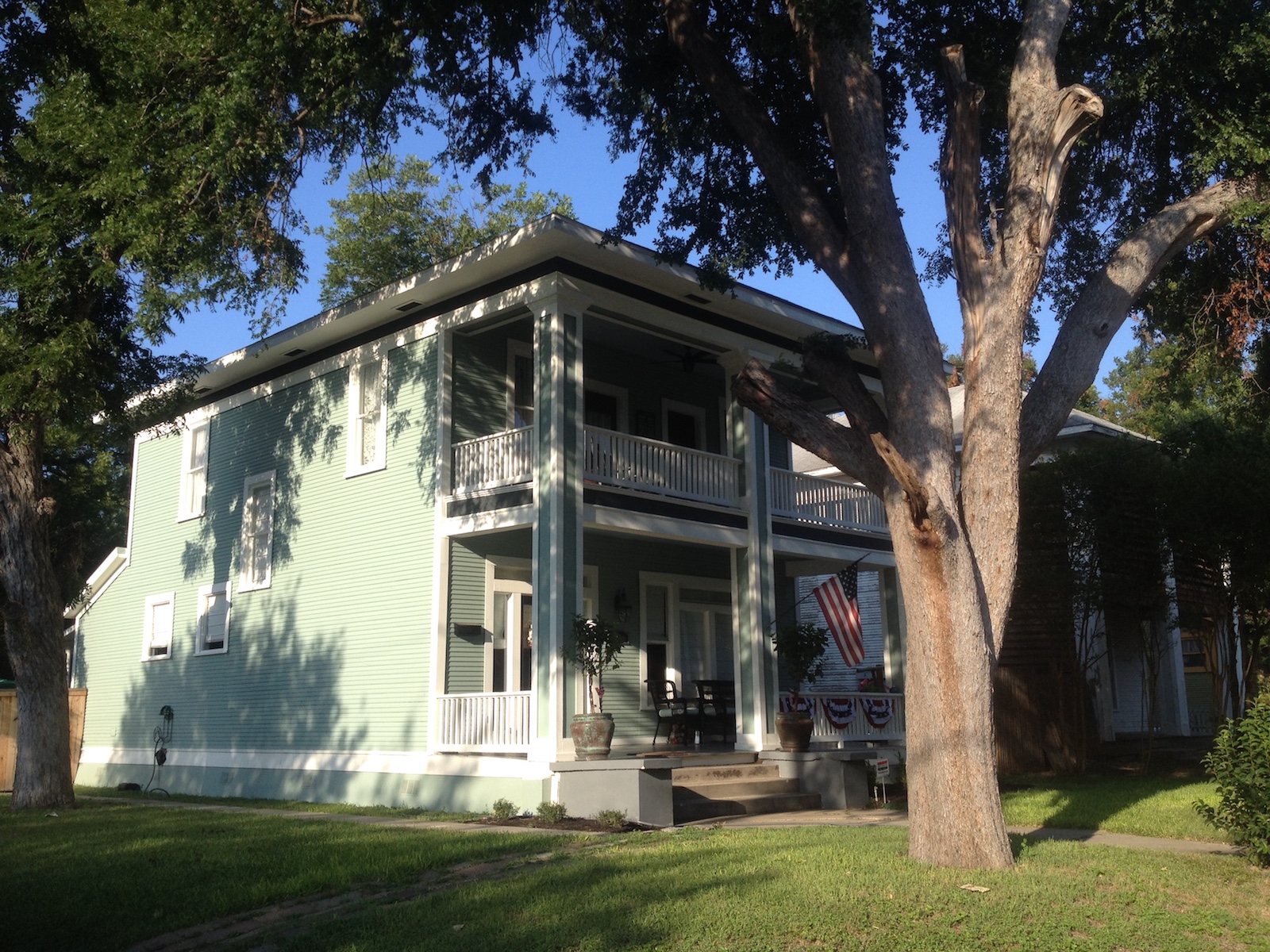 The Midtown area is growing quickly and has rapidly become one of the most attractive areas of the City in which to live for increasing numbers of San Antonians. While Midtown currently has a diversity of housing types and incomes, there is a significant portion of the population that are lower income households as well as mostly renter-occupied housing units (with many renters in single family homes or smaller buildings with 2 to 4 units). This high percentage of renters, particularly the large portion in single family homes, makes these households more vulnerable to displacement as new development occurs and market values increase.

While the percent of Midtown households that are cost burdened for housing has grown commensurate with the City and County averages so far, this may change in the future. New development has attracted new residents to the area who can support the current market rental rates and home prices. While existing and long-term residents have so far been able to remain in the area, the increasing financial pressure on these households from rising rental rates and property taxes may make it hard to remain.

The three main challenges in Midtown related to housing are:

Housing recommendations were developed based on the Midtown Area’s vision and goals and to address the challenges identified within the plan process. See the Housing Strategy document in the document library for a summary of housing conditions and challenges that provide the basis for the recommendations.

Ensure that zoning supports a context sensitive supply of diverse housing to support Midtown’s expected household growth.
Midtown has a diverse mix of housing types and ages of housing units. The area has a combination of older historic homes and new apartments and townhomes. Household growth is projected to continue in Midtown over the next 15 to 20 years. Directing most of this growth to mixed-use corridors and focus areas, while also ensuring that new housing in neighborhoods is context sensitive, will help maintain the affordability and character of the area.

Expand Midtown’s housing as affordable to households with diverse income levels, including households earning less than 60% of Area Median Income.
The Midtown area has a good mixture of households at various income and education attainment levels, as well as a diversity of jobs. As demand for housing in the area grows, a major challenge will be maintaining affordability for a diverse range of current and future residents. Currently, seven percent of units in Midtown are income or deed restricted affordable housing units, and more are naturally affordable. Maintaining these existing units and growing the number of new affordable units can help preserve opportunities for households earning lower than average incomes.

Maintain affordability and a diversity of housing options by accommodating additional housing in neighborhoods and transition areas through context sensitive design and small scale, infill housing.
Midtown’s population is forecasted to grow significantly over the next 15 to 20 years. Much of the housing needed to accommodate this growth is anticipated to occur in mixed-use focus areas and corridors within Midtown. However, accommodating housing growth that helps address affordability challenges and the impacts of increasing demand and housing prices must also be addressed within existing neighborhoods. Strategies to help maintain the current diversity of housing and allowing for context sensitive, small-scale infill development are needed.

Support San Antonio’s Housing Policy Framework
Midtown is one part of San Antonio, and its housing issues and opportunities are inextricably linked to the rest of the City and the region. Ensuring diverse and affordable housing options amidst all of Midtown’s opportunities cannot be accomplished with a focus on Midtown alone. Many programs, incentives, and funding sources for maintaining housing affordability should be established in consideration of the whole city. San Antonio’s Housing Policy Framework has identified actions, policy priorities, and implementation strategies to do this. Similarly, every Regional Center and Community Area in San Antonio has a role to play in achieving a diverse and affordable housing future for the City of San Antonio. Midtown’s communities have indicated through the planning process that diversity is valued, that Midtown is a place where existing residents should be able to stay, and where new diverse housing for people to live in is welcome. As with every other part of San Antonio, Midtown’s future success is tied, in part, to implementing San Antonio’s Housing Policy Framework.