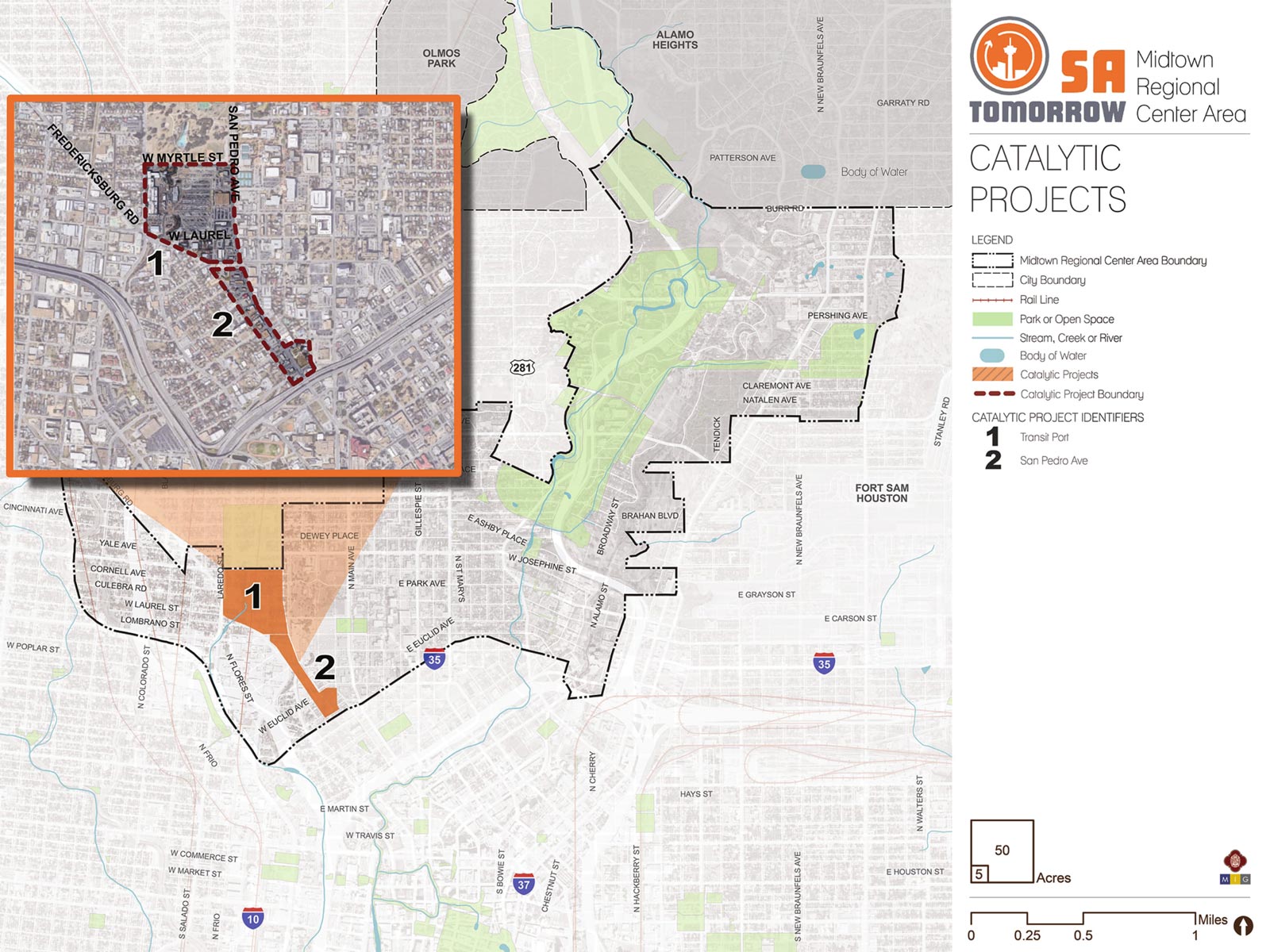 The San Pedro Gateway site is located on both sides of San Pedro Avenue, next to I-35.

The San Pedro VIA site is located on the west side of San Pedro Avenue, between Cypress and Myrtle.

Both of the catalytic project concepts for the Midtown Area Regional Center Plan are located next to San Pedro Avenue. They each show one scenario of what future development could look like in this area, how it could serve the community and complement the greater vision for improving quality of life in the Midtown Area.

The locations were selected because of their proximity to local amenities such as Downtown and San Pedro Springs Park, their adjacency to a potential high quality, frequent, and reliable transit service that VIA is considering, and the interesting challenges and opportunities they each present.

Recommendation #1: Support the development of a residential mixed-use neighborhood along the San Pedro Gateway.

Initiate a collaboration with VIA Metropolitan Transit to create a development/redevelopment plan for the San Pedro VIA site, which will enhance the concentration of surrounding amenities, support great transit service, and include high quality public spaces and desired community uses such as a grocery store, housing, and a multigenerational community center. 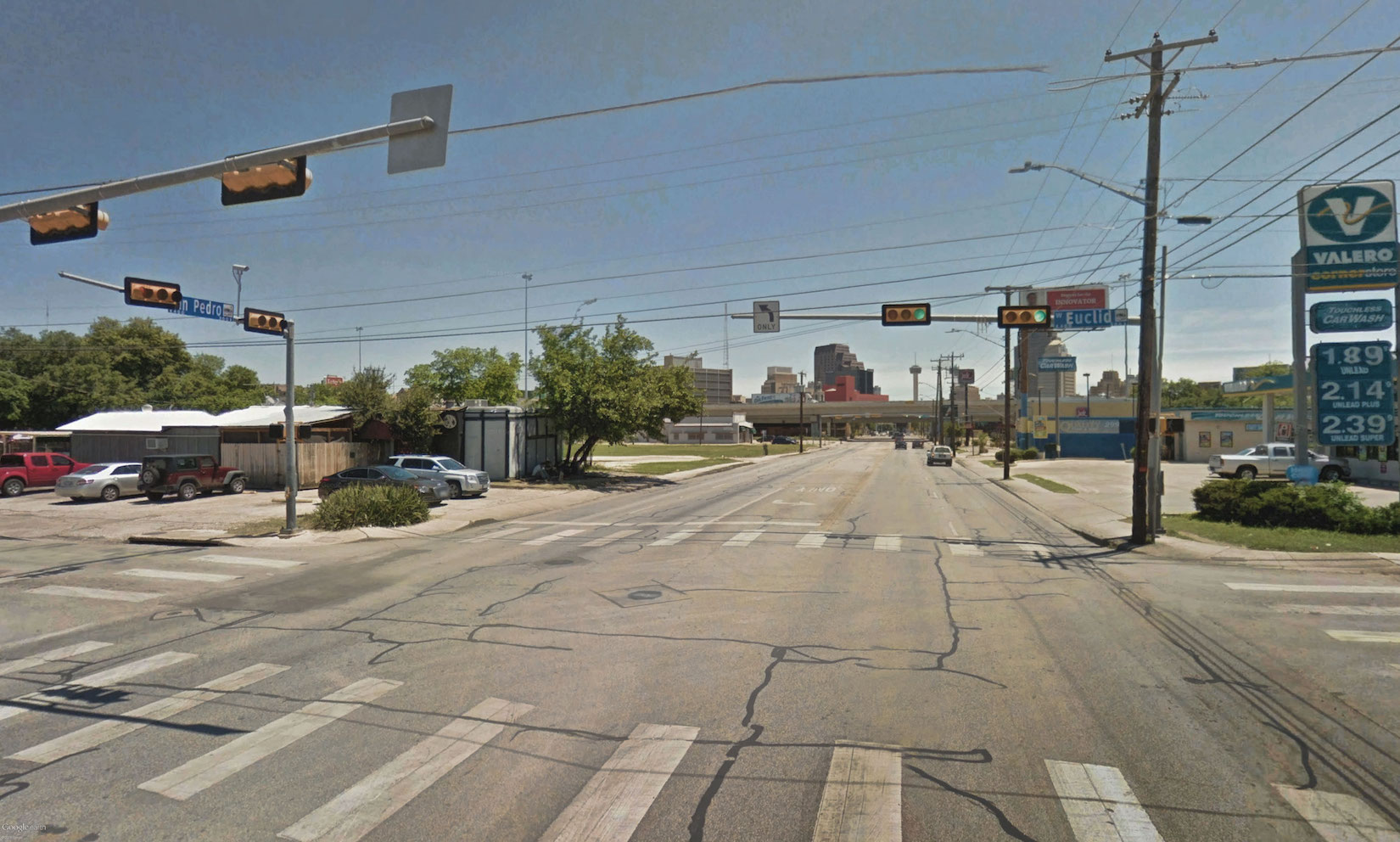 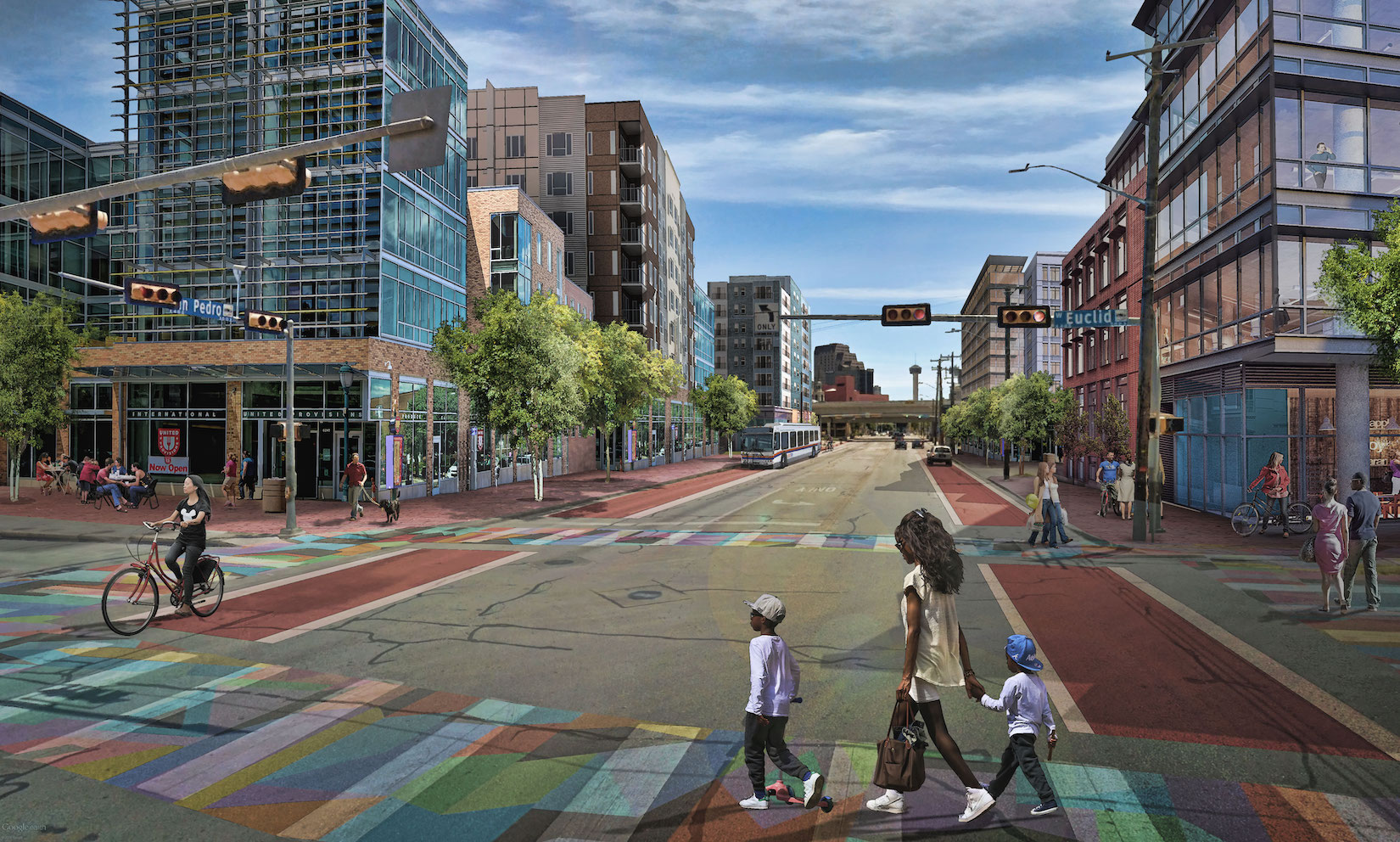 The San Pedro Gateway site is comprised of two blocks straddling San Pedro Avenue, north of I-35. The current mix of uses includes a new gas station/convenience store, drive through dining, gas station, legal firm, a bar, and residential. At the time of the Digital Design Charrette conducted for this site, the block on the east side of San Pedro Avenue included a large vacant lot. Since then, the property was sold and the gas station/convenience store was constructed. There is a historic landmark building on the eastern block of the Avenue.

Both blocks present interesting design challenges. The block west of San Pedro Avenue is narrow, which would make it difficult to include a primary use serving many people, along with parking, in a format that is pedestrian-friendly and sensitive to properties across the street primarily zoned for multifamily housing in Five Points Neighborhood. Mexican Americans or Hispanics represent greater than average majorities in the residential areas surrounding this site (typically 70% to 95% on any given block).

The vision for San Pedro Gateway is to support the Midtown Area’s need for more housing in areas with transportation choices and opportunity, in a design that reflects some historical building forms from the surrounding area. As discussed in other plan sections, not all blocks on all mixed-use corridors will be able to support a successful concentration of retail businesses, and not all properties in areas designated in the future land use map for high density need to have the highest density and largest buildings. 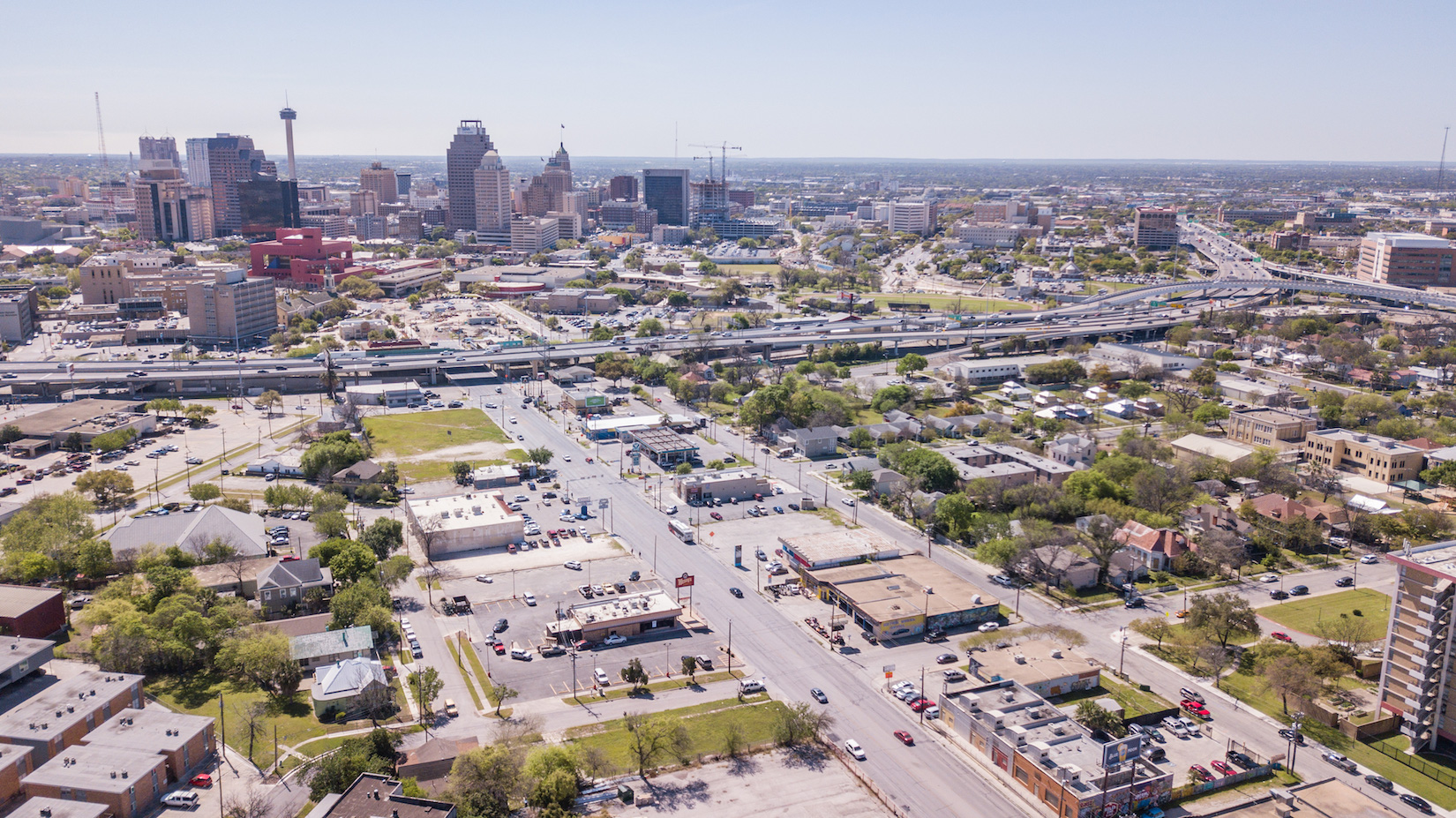 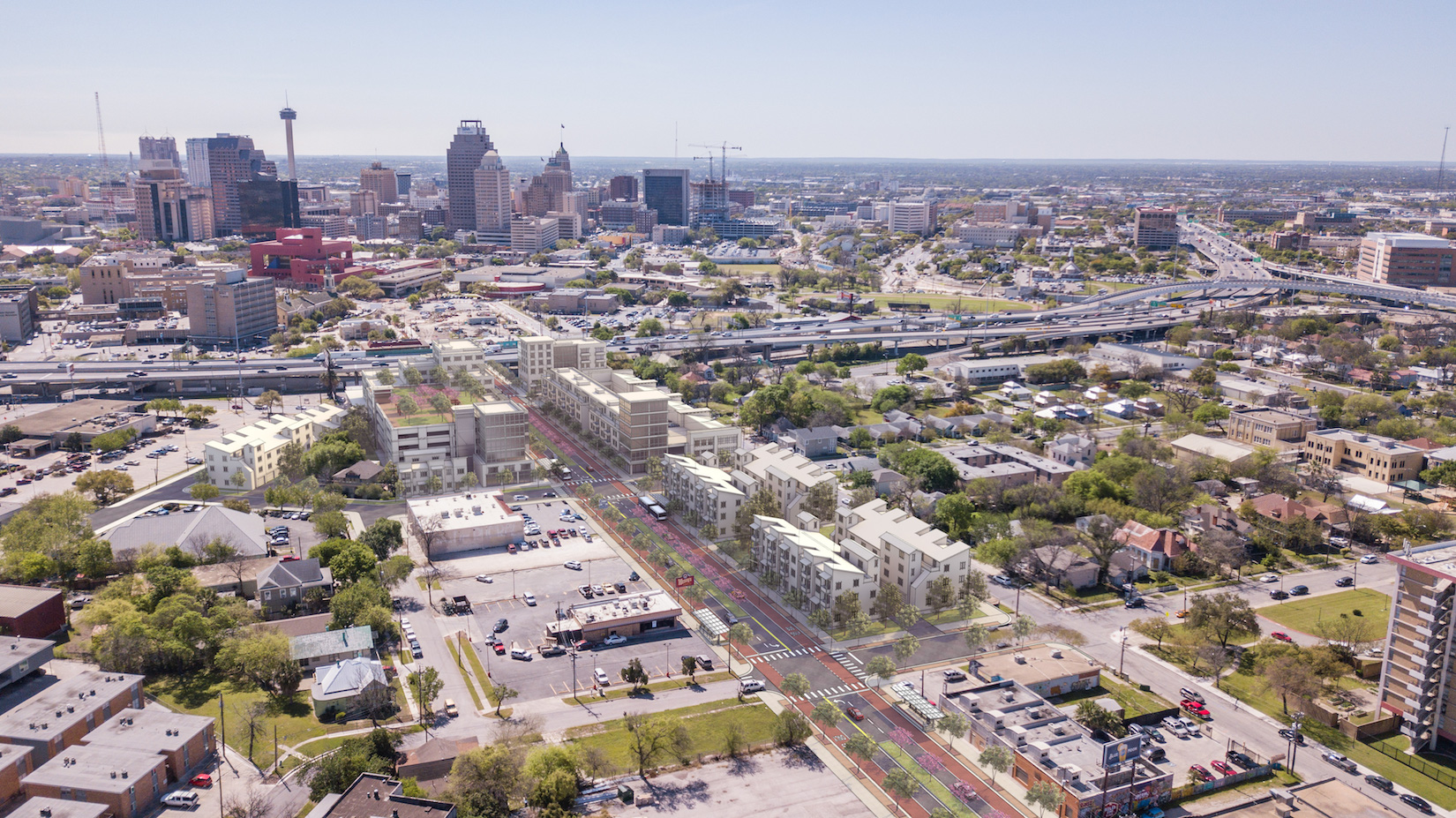 The vision for San Pedro Gateway reflects these realities, primarily offering housing for people that would want to stay in this area in both multifamily and townhome formats, while contributing to a population base that can support a high-quality transit station and concentrations of retail businesses a few blocks away adjacent to San Pedro Avenue between Poplar Street and Evergreen. The vision includes street-facing uses on almost all portions of the site, primarily oriented to San Pedro Avenue. Design principles for each block also include housing that faces Howard Street and Jackson, avoiding blank walls, exposed parking structures, and expansive service and delivery areas facing existing and potential future residential uses across those streets.

The concept buildings are large but are comprised of smaller parts that vary within a single block. Some of these parts mimic the proportions of historic two-story residential buildings in Five Points and Tobin Hill. The concept simultaneously signals a transition to downtown.

The vision for San Pedro Gateway also offered the opportunity to consider what the San Pedro Avenue streetscape could like in the future. The concept has not been studied for engineering feasibility, and is but one conceivable outcome; however, it shows how a combination of wider sidewalks, street trees, and other amenities such as lighting or benches could make San Pedro Avenue a more enjoyable place for area residents to spend time outdoors, or a more enjoyable place to pass through on foot. Achieving the vision for San Pedro Avenue, and several other mixed-use corridors in the Midtown Area, would benefit from Unified Development Code (UDC) amendments requiring new development to dedicate space for widening sidewalks, along with giving new development credit towards landscaping requirements for street tree planting.

Achieving the vision for San Pedro Avenue, and several other mixed-use corridors in Midtown, would benefit from Unified Development Code amendments requiring new development to dedicate space for widening sidewalks, along with giving new development credit towards landscaping requirements for street tree planting.

This concept is meant to be responsive to many area residents who have described regularly using San Pedro Avenue on foot, typically to use buses or area restaurants and services. High-quality transit service, a transformative street project, and new development paired with improved regulations can make this area work better for them and make it more useful for future generations. 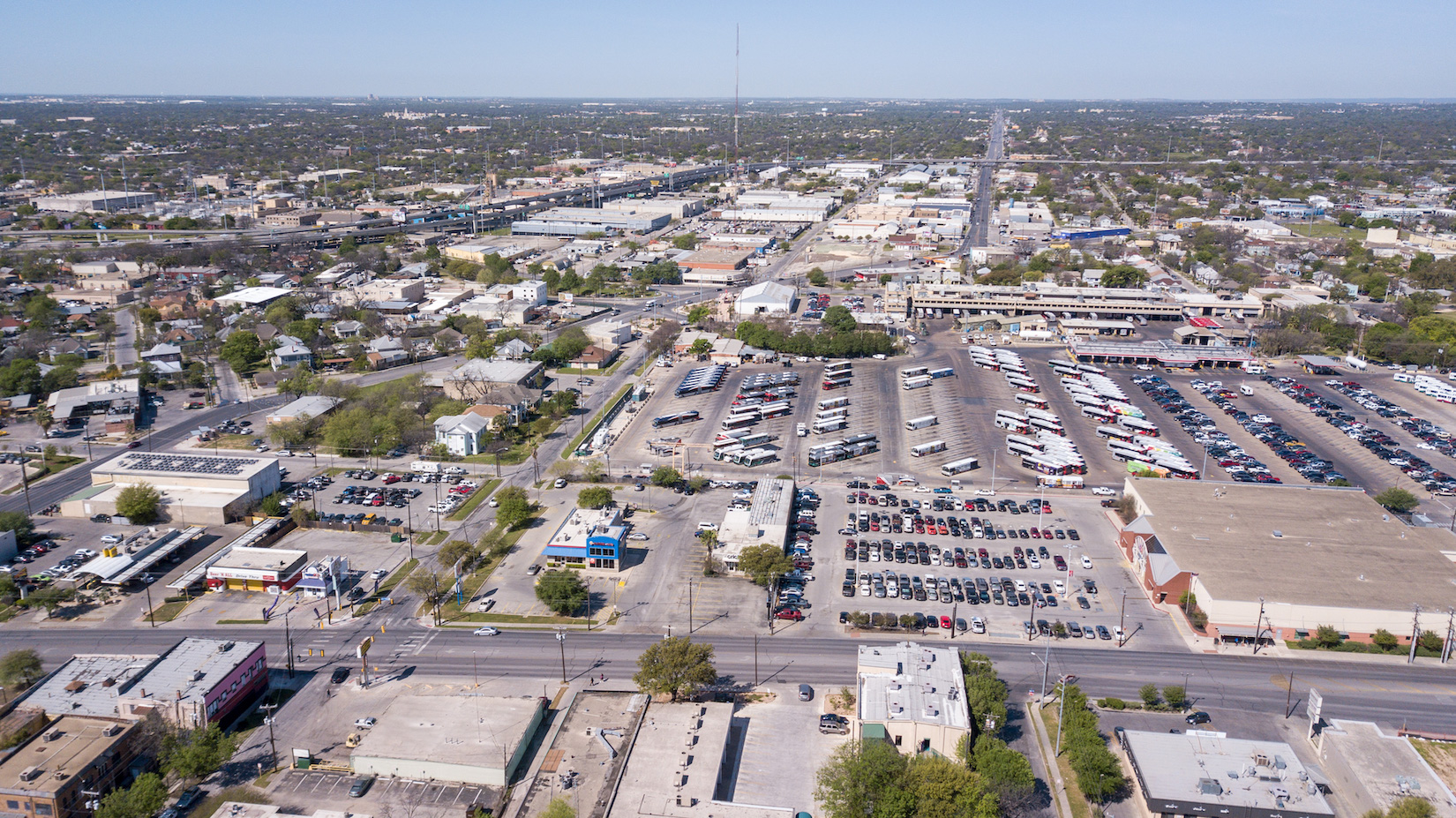 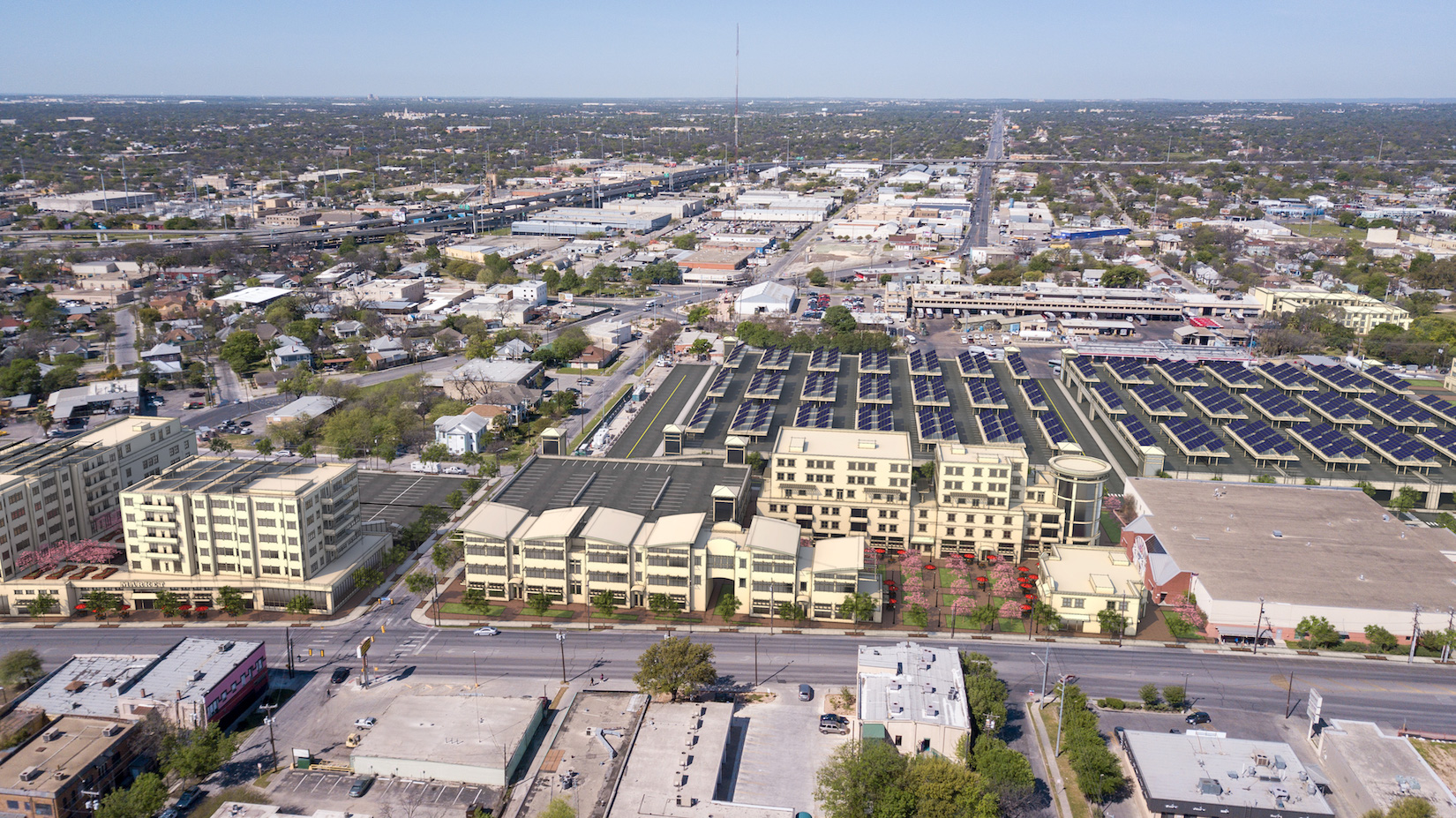 The San Pedro VIA site is much larger than the San Pedro Gateway site, and despite being only several blocks away, presents a unique set of challenges and opportunities for the future. Existing uses are primarily related to VIA’s bus maintenance, office, and employee parking needs. There is also a gas station, drive through restaurants, and drive through alcohol sales. San Pedro Springs Creek enters the site form the north, flowing above ground before entering an underground facility, then reemerging above ground closer to Fredericksburg Road. Surrounding the site, to the north is San Pedro Springs Park, to the west a collection of single-family homes and duplexes, to the south a mix of homes and industrial services, and to the east San Antonio College and a mix of uses that includes a bar, Esperanza Peace and Justice Center, a gas station/convenience store, and a drive through restaurant, among others. The site is home to Mexican Americans or Hispanics representing greater than average majorities in the residential areas surrounding this site (typically 70% to 95% on any given block). Existing public art near the Five Points intersection, including the Visión del Futuro mural, “Guardians of Five Points” sculptures, and native landscaping are a few examples of how public projects can effectively reflect local culture and landscapes.

On the site, over 500 transit vehicles are washed, maintained, and deployed every day, and hundreds of drivers, office personnel, and technicians work to keep VIA’s transit service running. The areas immediately surrounding San Pedro Springs Creek on the eastern portion of the site are critical to VIA’s operations for the foreseeable future. Some of these activities generate noise and light 24 hours per day. Other areas around the site perimeter are more likely to be available for development that supports a more diverse mix of uses within the timeframe of the Midtown Area Regional Center Plan. However, rearranging or relocating any element of VIA’s operations would be complicated and costly.

The long-term vision for this site includes developing the entire site for a mix of uses that includes dwellings for people to live in, high-quality public spaces, a continuous creek side trail connecting San Pedro Springs Park with Fredericksburg Road, retail and community services, and high-quality transit service on two adjacent sides. Recognizing the importance of VIA’s operations and the challenging decisions that would need to be made to accommodate this long-term vision for this area, which could likely only occur in a series of phases over decades, the catalytic site concept presented here only addresses portions of the site, primarily around the site perimeter, where redevelopment is more conceivable.

Vision for San Pedro VIA Site

The concept presented here would support a vibrant pedestrian streetscape on San Pedro Avenue, with a mix of uses that would generate foot traffic at varying times of day. Such a mix would include housing in diverse formats for diverse users, some ground floor retail and dining opportunities, a priority community use such as a senior center, and some priority retail use such as a grocery. Some of the housing should be for low- and moderate-income households.

A public plaza at the terminus of Evergreen would be a focal point and gathering place for the long street segment between Laurel and Myrtle, while also helping to define a connection to the vibrant street scene at Main Avenue and Evergreen a few blocks to the east. 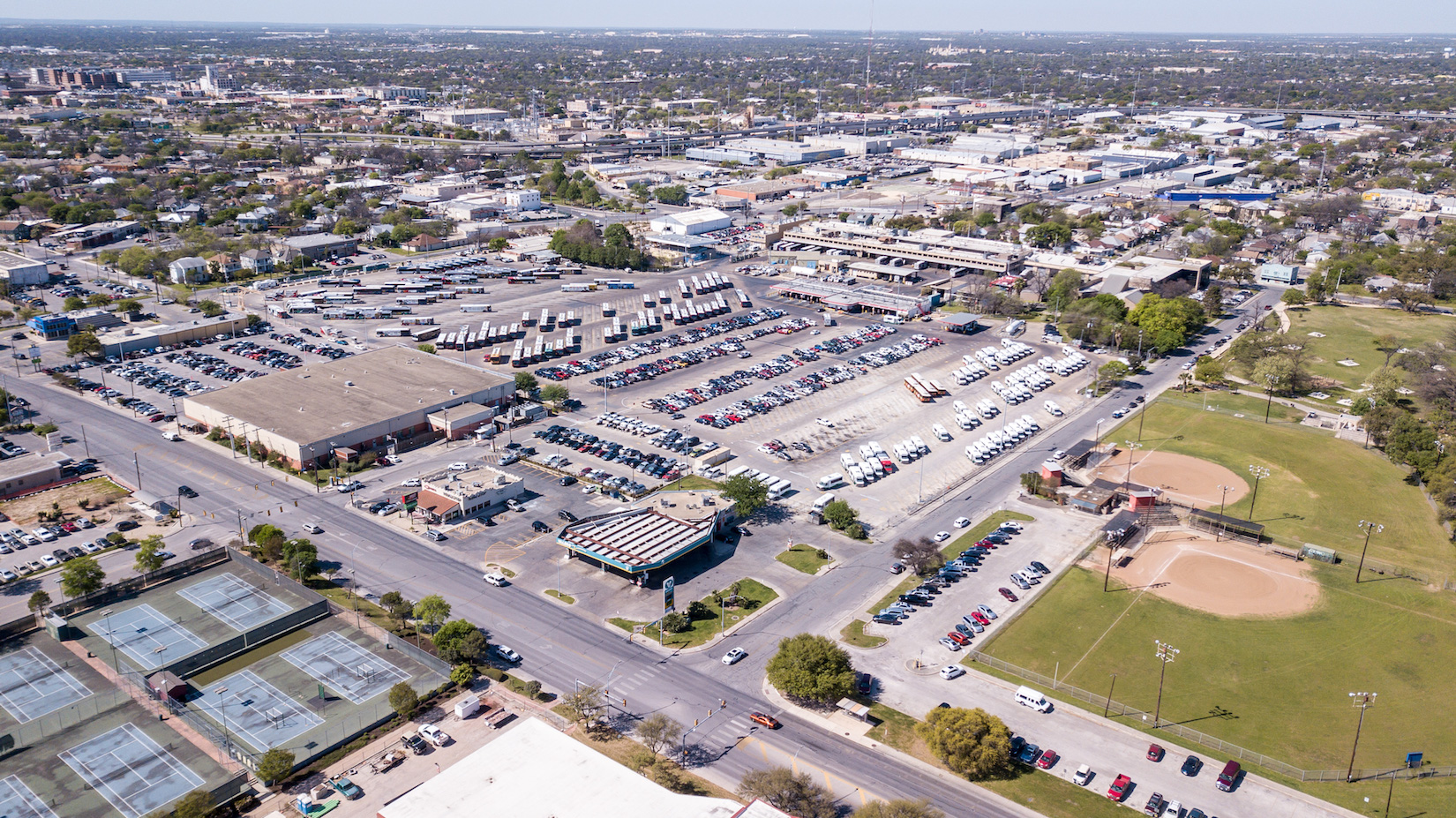 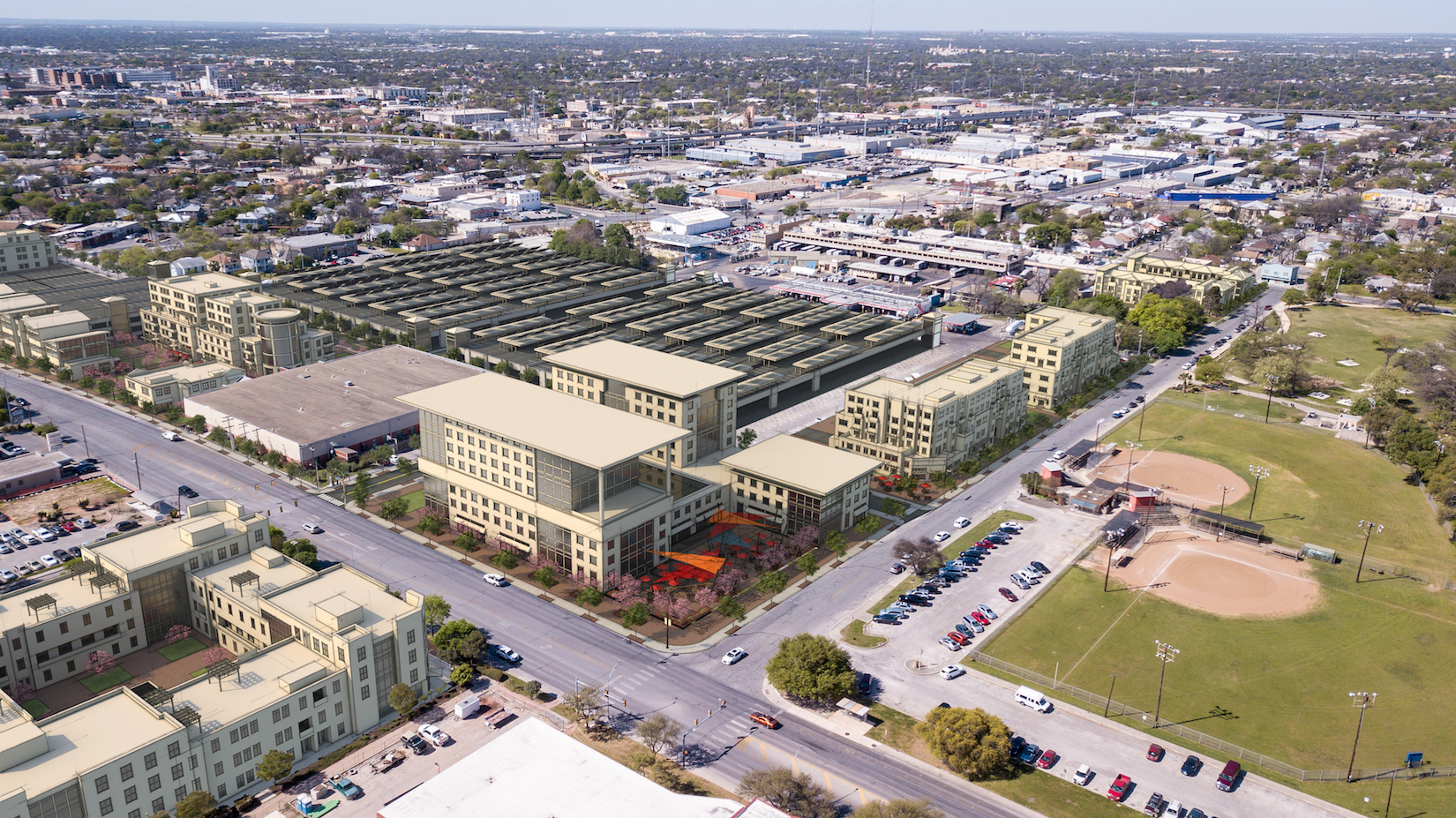 Offices and classrooms could also be accommodated here. Although San Antonio College has substantial growth opportunity within its existing campus, some future expansion could be absorbed near San Pedro Avenue. Complementary education opportunities could include vocational training linked to VIA fleet maintenance, student housing, or satellite classes for other schools that do not have a presence in the area, such as Texas Tech University. Shared parking facilities to efficiently serve the new users and existing local community users could be accommodated on this site in a way that does not compromise a comfortable and enjoyable environment on San Pedro Avenue.

Turning to the northern perimeter adjacent to Myrtle, housing would face and define an edge to San Pedro Springs Park across the street. The lowest intensity uses would be located on Flores Street, across from existing residential areas. Next to where San Pedro Springs Creek enters the site, new development would be set back from the creek sufficiently to provide for sunlight, trees, and green stormwater infrastructure, but would be partially oriented to the publicly accessible creekside improvements such as a trail, benches, and light; signaling a potential future when the Creek would be day-lighted and accessible to the public all the way from its springs to the Five Points neighborhood.

When redeveloping areas near San Pedro Avenue, Cypress, or Fredericksburg Road, opportunities to incorporate water features into public spaces should not be missed. San Antonio River Authority has identified potential locations throughout this area where surface water detention facilities could be installed to improve water quality in San Pedro Springs Creek.

The process for developing this concept revealed the importance of design to mitigate noise and light, and to account for VIA’s site circulation needs, while offering service and delivery areas for San Pedro-oriented development without compromising the San Pedro Avenue pedestrian environment. Dwellings and their windows could not be oriented to the site’s interior where VIA operations would continue. Buildings would have to include features for dampening outdoor noise. Extending Jackson north from Laurel to Myrtle would accommodate some combination of service deliveries, VIA circulation, and potentially a bike route if it would be relevant to the larger bicycle network.

Even if the long-term vision of creek restoration, creek access, and housing for people to live in near Flores Street proves elusive, implementing the primary concept would contribute to multiple Midtown Area goals, supporting access to nature and recreation, high-quality transit service, and accommodating many households and jobs in a place of opportunity.